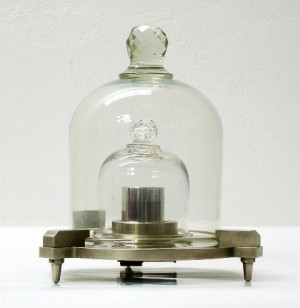 - prototype No.51 of the kilogram

The basis for dissemination of amass unit is the national standard prototype No. 51 of the kilogram, made of an alloy of platinum and iridium (90% Pt, 10 %Ir) in the shape of a cylinder with the diameter of the base equal to its height (approx. 39 mm), compared periodically to the international standard of kilogram (IPK). The standard has been utilized in GUM since 1952. International comparisons of the national standards of the mass unit 1 kg were performed in the International Bureau of Weights and Measures (BIPM) in 1988-1992. The mass of the Polish prototype, determined 1990, amounted to 1 kg+ 227 · 10-9 kg with the combined standard uncertainty of 2,3 · 10-9 kg.

Dissemination of a unit of measurement takes place through the calibration. It is required that the chain of traceability remain unbroken. Calibrations are of the hierarchic nature, starting from the prototype of the kilogram, through the copies of the kilogram and the mass standards of E1, E2, F1, F2 andM1 classes of accuracy, down to utility instruments (non-automatic weighing instruments). Dependent upon the use and technical parameters, weighing instruments are divided into accuracy classes: ordinary (IIII), medium (III), high (II) and special (I). Weighing instruments of high and special classes are used in research laboratories for precise mass measurements of tested samples. Weighing measurements of the medium class are most frequently met in everyday life as commonly used in sales. However, weighing instruments of the ordinary class are of industrial use, e.g. in technological production lines. In each of the above uses, the result of measuring a unit in any field is related to the national standard - the prototype No. 51 of the kilogram. 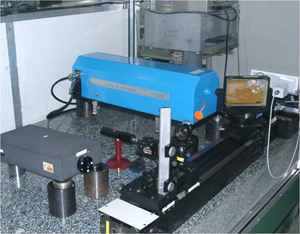 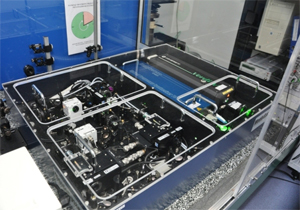 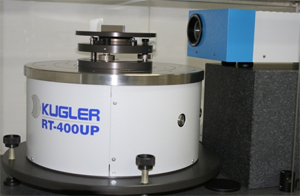 Optical polygons (U = 0,07"), writing angle blocks (U = 0,07"), autocollimators, angle encoders and precision electronic levels (value of expanded uncertaintyis dependent on the resolution of the instrument) arecalibrated on these stations.

Measurement facility of the refractive index standard was recognized as the national standardon 28 July 2003. It consists of a goniometer-spectrometer and standard prisms 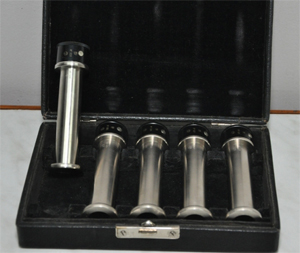 Quartz plates are used for calibration of photoelectric and visual polarimeters.

The national resistance standard is a measuring system which consists of the group of six standard resistors of 1 Ω nominal value of resistance, placed in a thermostat and a current comparator. Currently, the standard based on the quantum Hall effect is the best realisation of the unit of measure of resistance.

This measurement standard has been working since 28 July 2003. Earlier it had been working as the national etalon since 30 December 1980.

The national DC voltage standard is a measuring system which consists of the original intrinsic standard based on the Josephson effect with 10 V rated junction and the measurement system for verification of the characteristics and calibrations.

This measurement standard has been working since 20 January 2004. Earlier it had been working (since 28 August 1979) as the national etalon containing eleven measurement elements - Weston 4305 saturated cells.

The national inductance standard is a maesurement system consisting of the group of four standard induction coils, of 10 mH nominal value of inductance and precision comparators and bridges.

This measurement standard has been working since 29 August 2003.

The national capacitance standard is the measurement system consisting of the group of thermostated capacitors with a quartz dialectric of 10 pF nominal values and precision transformer bridges.

This measurement standard has been working since 24 April 2003. Earlier it had been working as the national etalon since 29 June 1989.

This measurement standard has been working since 29 August 2003. Earlier it had been working for more than twenty years (since 21 December 1981) as the national etalon.

It was recognized by the President of GUM in 2001. The standard consists of the group of five photometric Toshiba lamps (PS type, of 100 V nominal value of DC voltage and 200 W). The national luminous flux standard provides traceability for the light sources industry, research institutes of electro-technical industry and automotive industry.

The measurement standard, operational since the beginning of 1970's, used for reproduction of a unit of pH and ensuring traceability for pH measurements, was established as the national standard for pH unit in 1980. In 1999, and subsequently in 2003, the original decision was confirmed by succesive decisions resulting from legal changes.

The measurement standard of the pH, which is recognized as a national standard, is a system consisting of the thermostated hydrogen - silver chloride cells without transference (so-called Harned cells), a set of instruments for measuring electromotive force, temperature and preassure, and a data acquisition and processing device for calculation of the measurement result.

The primary method of pH measurement is based on measurement of the electromotive force ofhydrogen - silver / silver chloride cells without liquid junction, containing the pH standard with addition of a small amount of chloride ions.

The standard has been operational since 1960's. It was established for the first time by the decision of the President of the Polish Committee for Standardisation, Measures and Quality Control (PKNMiJ) in 1980. After the Law on Measures had entered into force in 2001, the new certificate of the standard was drawn up and re-issued in 2003. The standard is intended for reproducing and transferring the unit of temperature in Poland in the range from -189,3442º C to 961,78º C.

The temperature standard is the measurement system which consists of several components. The most important components are: fixed point cells, Ar, Hg,H2O, Ga, In, Sn, Zn, Al, Ag, which realize the definitional fixed points (corresponding to the physical transformations of pure substances), in accordance with the International Temperature Scale of 1990 (MST-90); standard platinum resistance thermometers (SPRT); resistance bridges; thermostating devices and standard resistors.

The standard constitutes the source of traceability for national calibration and testing laboratories and also for direct users of instruments. It means that any user of the temperature measuring instrument, either for the needs of aprocess (most frequently in food, chemical, engineering, iron and steel industry) or during the implementation of services (i.a.medical, transport, technical, catering services), has the possibility to review the credibility of such instrument's indications, by calibrating it in a competent laboratory, maintaining relation (traceability) to the temperature standard in GUM. 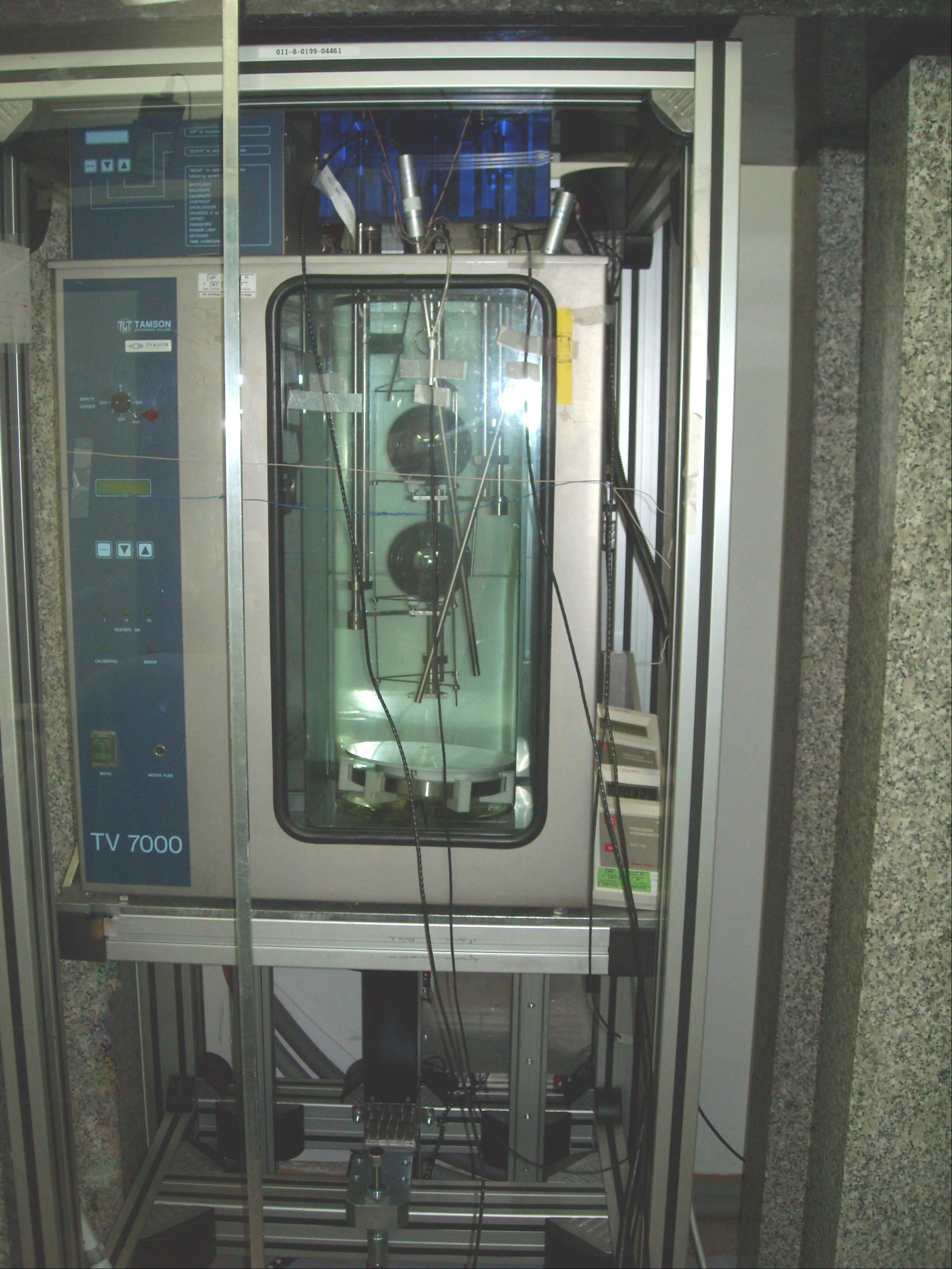 - SILO 2 standard while hydrostatic weighing, on their supports in the vessels immersed in the thermostats.

It has been established officially more than 30 years ago. In 1983, by the decision of the President of the Polish Committee for Standardisation, Measures and Quality, two facilities - for unit of liquid density and for unit of solid density - obtained the certificate of the national etalon. In 1990's, these standards were replaced with WASO 9.2 single cristal silicon in the shape of a rectangular prism of approx. 159 g. Its density was determined twice in comparison with PTB (the German National Metrology Institute) standards: by hydrostatic weighing against C1 and C2 Zerodur cubes (1985) and by pressure flotation against Si-1 silicon sphere (primary standard) (1998). WASO 9.2 was recognized as the national standard by the President of GUM in 1999.

In 2003, GUM purchased the 1 kg SILO2 sphere made of the single-crystal silicon of approx. 93.6 mmdiameter. It was calibrated two times against PTB primary standards, by means of the pressure of flotation method: in 2003 and in 2013.

The density unit is transferred to standards and measuring instruments used in many fields of science and industry, in order to determine properties of materials, technological processes' parameters, amount and quality of products (chemical, petrochemical, spirit, pharmaceutical, food industry etc.), such as hydrometers, oscillation-type density meters, pycnometers, reference materials.

The AC voltages ratio at 50Hz is an electrical quantity with wide scope of applications in the electricity production. This basic area of application of the measurement standards which reproduce AC voltages ratio - the so called inductive voltage instrument transformer - is the measurement of the electric power (with the parallel usage of the electricity meters) at electric power producer facilities (powerplants) and in electric power transmission from the energy producers to the customers (high, medium and low voltage power supply networks). The electricity meters, because of their parameters, are not able to measure this power directly. For this reason there is a need to apply a special kind of measuring system including an interface element - the inductive voltage instrument transformer which is connected with power grid and electricity meter working at low voltage level of the secondary transformer. The exact measurement of the electricity power in the power gridsis essentially important to identify the energy losses in transmission. The financial settlements between energy industry, energy producers and big energy customers take place on the basis of the measurement system indications.

The exact measurement of the above mentioned quantities is also applied in the process of inductive voltage instrument transformer production. These devices have to meet specific requirements, particularly regarding accuracy. The accuracy is also essential for research and calibrating laboratories for which the standards maintained by GUM are the best source of traceability.

The national AC voltage standard is a measuring system used for very exact transfer of the AC voltage by comparing its effective values with the exact known values ofthe DC voltages. It consists of two sets of the thermal voltage converters of AC/DC voltage: electronic converter which serves to transfer the voltage in the range from 22 mV to 700 mV, one set of three thermal voltage converters of AC/DC voltage and five range resistors which serves to transfer voltages in the range from 1 V to 1000 V. Thanks to these converters it's possible to transfer the AC voltage at frequencies from 10 Hz to 1 MHz.

Both above mentioned standards have been working in GUM since 19 December 2014. Previously they used to have a status of the reference standards.

There is a demand for receiving of accurate measurement results for high voltage and currents electrice energy. The electricity meters, because of their parameters, are not able to measure this power directly. For this reason there is a need to apply special kind of measuring system including an interface element - the power transformer connected with power grid and electricity meter working at low current value level of the secondary power transformer. The exact measurement of the electricity power in the power grids is essentially important to identify the energy losses in transmission.

The exact measurement of the above mentioned quantities is applied in power transformers production. These devices have to meet specific requirements, particularly regarding accuracy. The accuracy is also essential for research and calibrating laboratories for which the source of measurements uniformity are the standards maintained by GUM.

The above mentioned standard has been working in GUM since 30th January 2015. Previously it used to have a status of reference standard.

At the moment the Central Office of Measures maintains 21 national measurement standards and reference standards of the highest unit of measures reproduction accuracy class.